Manage to create Apple version of music transcribe app. It is released on 13 Dec 2015. 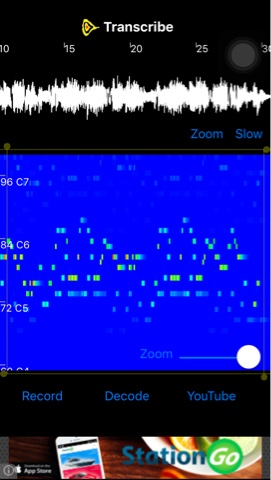 Latest 1.3 version has YouTube video feature where you can transcribe any YouTube music. It has a reconstructed playback and original audio playback. Both playback mode has slow down speed switch. The slow down lets you see and hear what notes play what sound.

Traditional transcribe a music requires to slow down the music. In 2015, transcribe technology has improved to a point where the note is accurated calculated and display to the end user. It will take some time for people to use this new wonderful method.

The iOS version takes about 3 months to create. It is tested on iOS 6 to iOS 9. It is totally free. Its android version is released 6 months earlier on 130515.

I am thinking of creating a real time audio musical note decoder.

I am also thinking of creating a audio to midi converter.

A seperated app to display midi as sheet music. The score app is named Midi Score.

So from transcribe to score is only a button press away.
Posted by Designer at 22:58